Welcome to AAWR, this was made by a group of friends who hang out, role-play, and do crazy shit. Feel free to join us, or watch us daily!

"And it is foretold, if five certain Elder Scrolls are read simultaneously, it reveals a prophecy: heroes and heroines would come together from various eras and times to appear in a time lost to Nirn, to destroy an evil empire and bring peace back to the world."

(please post your character Sheet on "Themed RP?" before you RP on here.)

Era they are from: Merethic Era

Appearance: Golden skin, copper colored hair put into a ponytail braid, honey-brown eyes, about 5'7 in height, still looks like she could be in her 30's even though she's over 350. Wasn't wearing armor when she came through the portal because she was simply going for a walk.

Anything else?: She is the middle child in her family, so she never got much attention. Always tried to impress her parents, but never got their attention for long. Spent most of her life honing her skills. Father died recently in a skirmish with the Dwemer, causing her to return home. Also, still single even after more than 350 years. That's just sad.

(That's the closest to a rebel I will get. Posting things in the wrong places. X3)

Age: 20 (In Argonian years, it's slightly less in normal years.)

Appearance: Dark Purple and gray scales, a swirl-like war-paint on his left eye, he's slightly taller than the average height of an Argonian, he has two-ram like horns, and feather-like things on the top of his head. He arrives in this strange place with the leather armor he was wearing, soul gems attached to belts wrapped around his body and waist.

Skills/abilities (like one handed or archery, please keep it within reason): Is skilled in One-handed (mostly blades), Enchanting, knows the Spell Soul Trap, and is skilled in light armor, somehow that's a skill... He is also a Dragonborn, though only three shouts: Unrelenting Force, Whirlwind Sprint, and a mysterious third one he has shown nobody :3.

Anything else?: His parents fled his home of Black Marsh to Morrowind to avoid him becoming a ShadowScale, He became an apprentice of a Master Enchanter, where he learned his skills in that, years pass, he went to Skyrim to make his fortune, and trained under a Nord, where he got his skills with a blade.

(Sweet! Pelingal likes to have a weapon that can take souls.)

(Enchantments on his items:
Headband: Decreases the amount of magicka required to use his soul Trap
Chest armor: decreases the amount of damage he takes from attacks.
Boots and Pants (Because it's retarted they took out pants from Skyrim): Makes his footstep as quiet as a mouses'.
Gauntlet: His blade cuts deeper and faster.
Sword: Shocks the target with the power of Lightning.
NOW RP!)

(I agree about the pants!)

Pelingal looked around at the path she had walked out onto. "Eh!? What is this, some sort of illusion? This wasn't ever here! I saw, just yesterday... This was a dirt path, not cobblestone! No one can work this fast, not even a mage!"

*MEANWHILE! In Skyrim, many MANY years into Pelingals future, a dragon crashes into a mountain, a sword in its head and an Argonian on its neck, he hops off it, and rips the sword out of its skull, as its body decays to bone and its soul surrounds the Argonian in a bright light, at that same time a briht light shines, once both lights vanish, the Argonian finds himself in a strange place, near [Pelingal]* What the...?

Pelingal's left ear twitches. "Who's there!? I warn you, I'm armed! I've killed over one hundred and maimed a thousand Dwemer scum and I'm not afraid to increase the numbers!"

(Pelingal is wearing a dress like this:
[You must be registered and logged in to see this link.]

*The Argonian pulls out his sword and takes a step back.* Don't you threaten me, you're the one who brought me here!...Aren't you? Wait, did you say Dwemer?

Pelingal nods like he's stupid. "What manner of creature are you? I've heard rumors of lizard people , but I never believed them."

What, back up, what kind of Dwemer have you fought? because the last I checked, they went extinct centuries ago!

"The Dwemer threat to our colonies is very much alive last time I checked. I had to return from battle because my father was killed by them! I don't know what kind of joke this is, lizard, but I am not amused!" Pelingal shouted, glaring daggers at him. Her hands lit up with magical fire, and she said. "Answer me who did this, and perhaps I won't burn you to a crisp!"

I don't know who did this lady, I just killed a dragon, and I ended up here!

Pelingal put out the fire in her hands. "Yes, the dragons are a nuisance. It usually takes a small army to even scare on off, though... You say you killed it?" She started fiddling with her ear. "How many warriors did it take to accomplish this? Perhaps you lizard people are stronger than the rumors say."

A small army? to take down a dragon? I mean, if you count two people as an army, I guess that's true but... *He rubs the back of his head awkwardly.*

Era they are from: 2nd Era

Skills/abilities (like one handed or archery, please keep it within reason): Archery, One Handed, Illusion, Alteration, Light Armor

*Zenith stands up, scratching his head, looking around*

(Lilmothiit... I've heard that name before... Isn't that the dog people mod for Skyrim?)

Era they are from: Merethic Era

Skills/abilities (like one handed or archery, please keep it within reason): All magic schools (Not the best at them, around journeymen level), One-handed 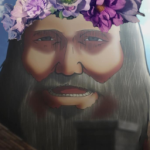 But yeah, I took down a dragon, and a friend of mine shot at it wihle I crashed it into a mountain.

*Mikralli looks around, casts a ward shield and conjures a daedric sword*

"Don't speak to me Argonian."

Pelingal passes out from shock, crumpling to the ground in less than a second.